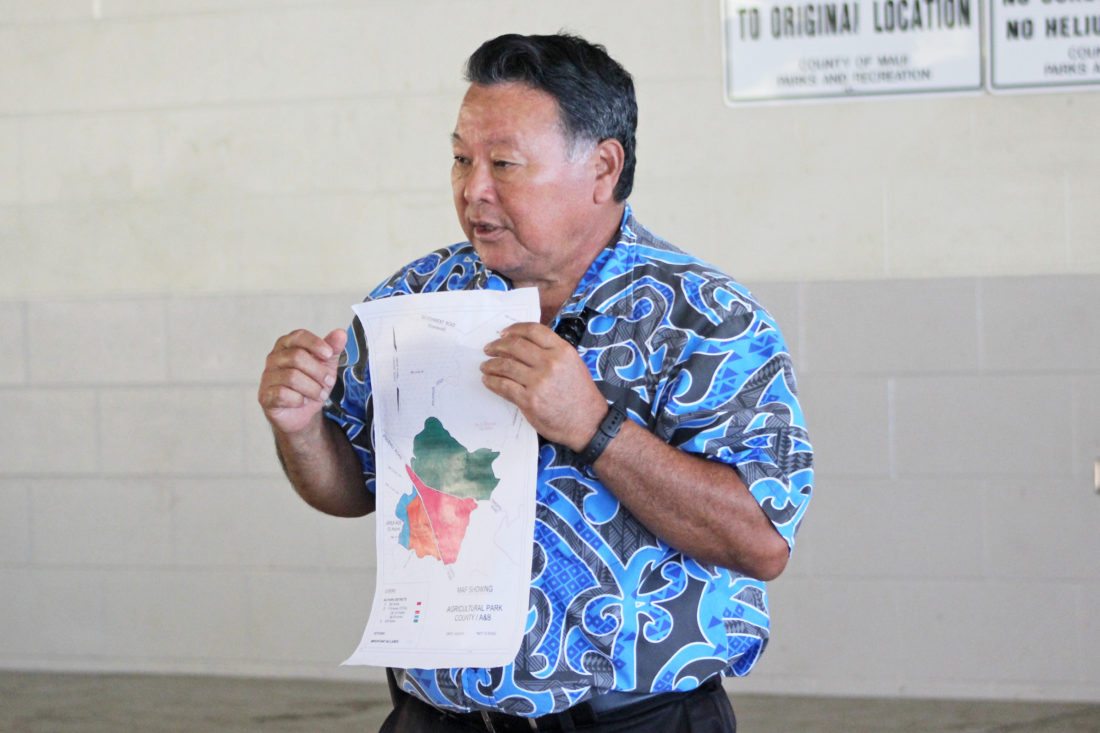 During a meeting at the Kula Community Center on Wednesday, Mayor Alan Arakawa points out the 869 acres that the county is thinking about purchasing to expand the Kula Agricultural Park. The county invited local farmers and ranchers to ask questions and offer their thoughts on the expansion. • The Maui News / COLLEEN UECHI photo

KULA — In his 35 years with the agricultural program at the University of Hawaii Maui College, rancher William Jacintho has seen plenty of young farmers graduate “and find themselves against the wall.”

“We’ve had plenty students that got nowhere to go,” Jacintho said. “They graduate. They want to farm or do a nursery. . . . The whole bottom line is that there aren’t parcels for people to farm at a small size, and to me that’s critical.”

That’s why Jacintho is supportive of Maui County’s plans to expand the Kula Agricultural Park. With funding from the state, the county is thinking of leasing and eventually purchasing 869 acres of former sugar cane land from Alexander & Baldwin. Several residents who showed up to a meeting at the Kula Community Center on Wednesday said they hoped the park expansion could open the doors to more small farmers, who face challenges in the availability of farmland and its cost.

“I think it’s wonderful. We need all the farmers and ranchers we can get,”lifelong Kula farmer and rancher Annette Niles said. The challenge is “trying to find land, especially for young farmers. You go to spend all this money in college, you go to the ag program, you become a farmer, where do you go?”

The current Kula Agricultural Park on Pulehu Road spans 445 acres and supports 26 farmers on lots ranging from 10 to 30 acres in size, according to the county website. Kula onions, vegetables, turf grass and dryland taro are among the crops growing there. Land in the current park is leased out for $100 per acre per year, said Teena Rasmussen, director of the county Office of Economic Development. 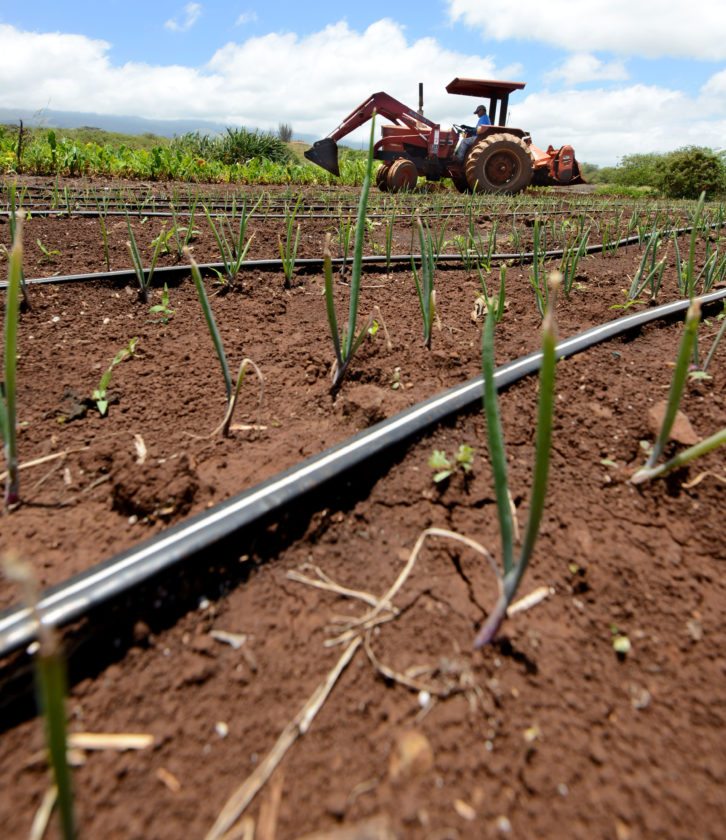 Onion sprouts of a variety trial at the Kula Agricultural Park blow in the wind Wednesday morning at the University of Hawaii College of Tropical Agriculture and Human Resources farm lot. In the background, ag tech Ward Murashige creates a shallow drainage swale between the onions and a test patch of dryland taro. The county is considering purchasing old sugar fields to expand the park. • The Maui News / MATTHEW THAYER photo

The 869 acres that the county is considering are divided into four parcels bordering Omaopio and Pulehu roads, just west of Hawaii Sea Spirits Organic Farm and Surfing Goat Dairy.

“Compared to the present Kula Agricultural Park, the elevation is much lower, so it will be warmer or hotter for a longer period during the year,” said Kenneth Yamamura, agricultural specialist with the Office of Economic Development. “It will also be windier since the trade winds will blow over that area.”

Yamamura said there are plenty of crops that could be grown there, including bananas, papayas, cucumbers, pineapple, tomatoes, sweet corn, potatoes and chickpeas. The site also could be used to raise livestock. Growing numbers of wild pigs, axis deer and various birds in the area could pose a challenge to farmers, he added.

The state Legislature has set aside $5 million for the purchase, and the county is chipping in another $1 million. However, a deal with A&B is still in the early stages.

Mayor Alan Arakawa said the county first has to figure out what farmers envision for the land — lot size, crop types, farming methods and more. The county is thinking of buying some of the land and leasing other parcels that it will eventually purchase. He said the park is open to all crops and farmers.

“What we’re trying to do from the county side is to provide opportunities for those on the smaller scale to be able to actually create farms,” said Arakawa, who is also a farmer.

Arakawa said he hoped the water costs would be lower in the extended portion of the park, because it sits below the 55-million-gallon reservoir and can be gravity fed. Water has to be pumped uphill to the current agricultural park.

Depending on the type of crops grown in the park, Arakawa said the county may have to install a system to generate potable water to wash hands or produce.

Some residents raised concerns about having conventional and organic farmers in the same area.

Yamamura said that “if there’s a great interest from organic farmers, essentially they have to come together as an organic coop so they can manage an area, rather than having individual 2- or 4-acre farms, and figure out the best way to put some kind of buffer.”

Rasmussen said it’s only “Day 1” of the process to expand the park. The county has to work out a plan for the additional acres, and the County Council has to approve the purchase before the state can release the funds. Arakawa said it could take two to three years before farmers could actually get onto the land.

“That’s why we have to know more as to what people want to be able to do,”he said. “Because we’re going to have to try to plan out areas and later on do soil testing to try to put farmers in appropriate places for the best chance of success.”

Simon Russell, chairman of the Hawaii Farmers Union United’s legislative committee, said one of his big concerns was affordable housing. Cultivating 869 acres will take a lot of workers, and housing isn’t cheap Upcountry, he pointed out. Farmers also can’t live on their plots or build any nonfarm structures in the agricultural park.

But Russell said the low cost of rent in the agricultural park would help attract farmers, many of whom don’t have their own land.

“Food security is something that I’m very concerned about for the long term,”he said. “There’s other things that are more profitable than vegetables, but frankly we need vegetable crop production, and Kula is a wonderful place to grow vegetables. I would hope that the people growing the food would be able to live up here.”

Russell grows sugar, papaya, vegetables and herbs on 2 acres in Makawao and hopes to lease 100 acres in the extended park.

Jacintho, who runs Beef & Blooms and Na’alae Beef Co., isn’t planning to lease land in the park, but said he hoped the county could set aside smaller parcels of a few acres for farmers. He pointed to a 2012 U.S. Department of Agriculture Census that showed that most small farms in Hawaii were from 1 to 9 acres. In Maui County, 711 farms were of that size, with 293 farms of 10 to 49 acres and 61 farms of 50 to 179 acres.

He knows smaller plots are harder to manage, “but there’s a need for that.”

For more information, call the Office of Economic Development at 270-7710.