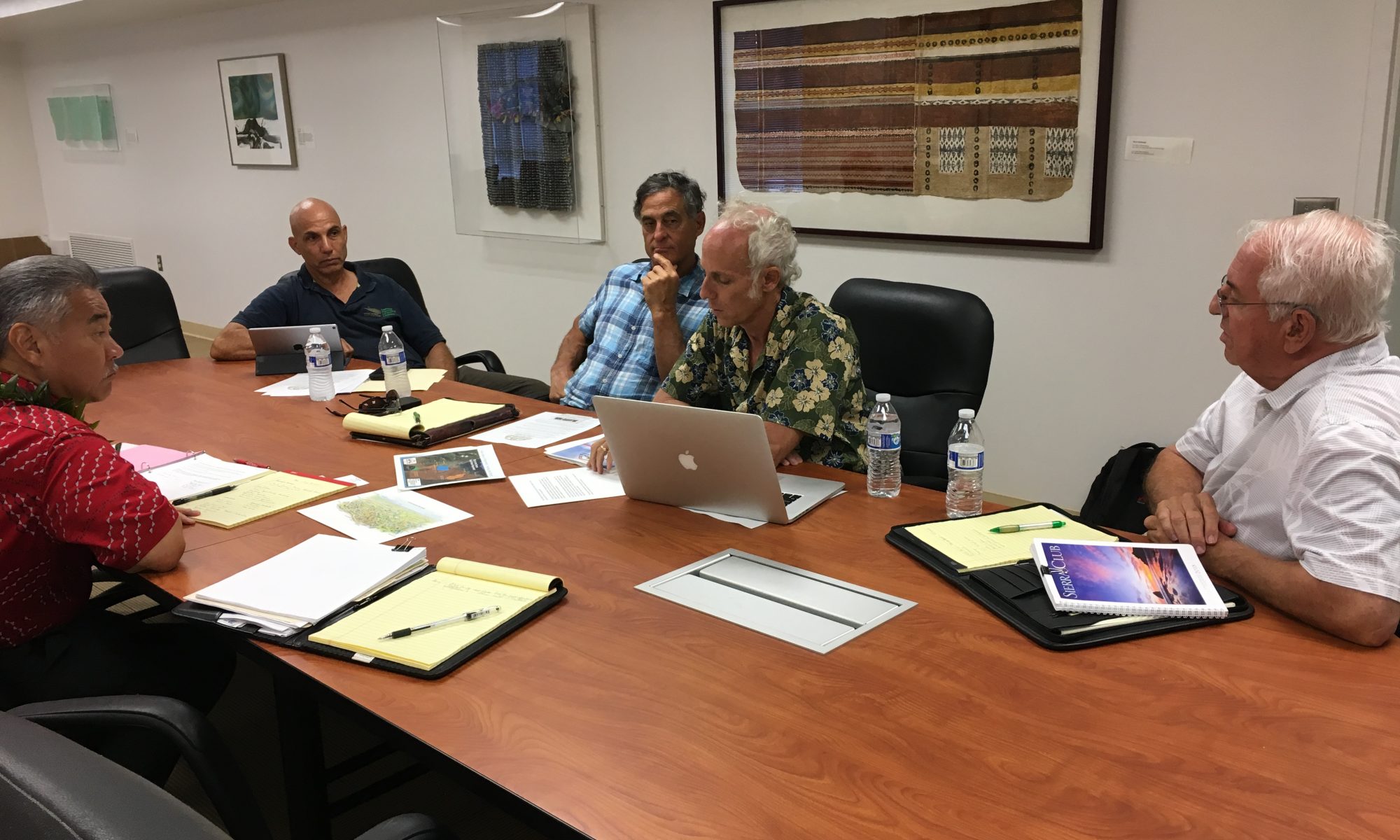 Four representatives of the Farming, Affordable Housing, and Conservation efforts of Hukilike No Maui met with Governor Ige on July 28, 2018 to present our vision and request his support. There was good discussion and the meeting should help in moving the work forward to get the former cane lands on Maui into regenerative agriculture, affordable housing in sustainable communities, and conservation of sensitive areas.

At the recommendation of the Governor’s office, a further meeting was held with Chairperson Scott Enright of the Department of Agriculture on September 26, 2018. That meeting was attended by John Dobovan, Stan Franco, and Rob Weltman.

HONOLULU, Feb. 20, 2018 /PRNewswire/ — Alexander & Baldwin, Inc.(NYSE:ALEX)(A&B) will report results for the fourth quarter and full-year 2017 at 4 p.m. ET on Wednesday, February 28, 2018. In connection with this announcement, A&B will host a live webcast of its conference call with financial analysts and professional investors on February 28, at 5 p.m. ET.
END_OF_DOCUMENT_TOKEN_TO_BE_REPLACED

Excerpt from Maui section of the report (pages 90-91):

The Island of Maui, known as “The Valley Isle,” is the largest and most populous island in Maui County. Maui boasts a varied geography with coastal communities and mountainous areas in West Maui, small towns and agricultural communities in Upcountry and East Maui, and the more urbanized areas of Central Maui (County of Maui 2012). With 148,403 residents (State of Hawai’i 2015), the Island of Maui accounts for 10.6% of the State’s population. Since the 1970s, Maui has experienced significant growth in both resident and visitor populations. A near tripling of Maui’s population over the last 50 years, coupled with a growing tourism industry—over 2.6 million visitors came to Maui in 2016 (State of Hawai’i 2016) —has placed ever increasing demands on natural resources, critical infrastructure, and basic services. END_OF_DOCUMENT_TOKEN_TO_BE_REPLACED

Maui Tomorrow commissioned a report in 2016 on how the vast acreage no longer being used for sugar cane could form the basis for a thriving future agriculture. The detailed report takes into account soil conditions, altitude, wind, and many other factors to identify appropriate crops for different parts of these former HC&S lands. You can view the report here.

A general map showing possible uses of now fallow sugar fields — including areas for possible biodiesel-producing tree orchards, coffee and cacao crops and livestock-irrigated pastures — was projected on a screen as the former general manager of Hawaiian Commercial & Sugar Co. gave a presentation at the Maui Energy Conference last week.

Rick Volner, who has transitioned to general manager of diversified agriculture for Alexander & Baldwin, told the audience March 22 that agricultural land use is decreasing statewide. Some of the land has given way to development and other areas have sat fallow for so long it is difficult to reutilize.

However, for old HC&S lands, “We feel we have the significant opportunity to alter that landscape,” said Volner, the last general manager of the last sugar plantation in the state, which shut down in December. “Our lands are uniquely positioned to succeed in diversified agriculture.”

“It’s very difficult, almost impossible, to find the type of contiguous lands we have access to here in the central valley of Maui,” Volner said. “We have existing water infrastructure. We’re close to cargo ports, whether it’s by sea or by air. And we have a very strong labor base, a labor base that previously worked these fields and is basically sitting idle at this point.”

But even with all of the advantages, there are “significant challenges,” he said. Though he did not specifically cite the challenges, HC&S had faced community opposition in recent years for its cane burning, use of pesticides and other farming practices.

A&B also is facing a challenge from taro farmers and Native Hawaiian practitioners over its long-held diversions of water from East Maui. The state Board of Land and Natural Resources currently is considering a 30-year lease for the continuation of the more than 100-year-old diversions through tunnels, siphons and ditches to fields in Upcountry and Central Maui. The Commission on Water Resource Management currently is establishing stream-flow standards for diverted streams.

A&B is seeking 115 million gallons a day for its diversified agriculture plans in its lease request.

The slide shown behind Volner gave a general idea of A&B’s plans for the 36,000 acres of old sugar cane land. The map was not very specific but did offer some landmarks, such as towns and Kahului Airport.

An area in north Kihei/Maalaea has been designated for pongamia orchards. According to the BioEnergy Plantations Australia website, the plant, also known as millettia pinnata, is a leguminous tree, native to northern Australia. The oils extracted from the tree can be used as biodiesel.

A&B has set a plot mauka of Pukalani for coffee/cacao production. James “Kimo” Falconer, president of MauiGrown coffee, said Wednesday that his company has been in talks with A&B about lease possibilities for land in the Omaopio/Pulehu road junction area and near Haliimaile. A $13 million special purpose bond bill still alive in the state Legislature could make that expansion of MauiGrown coffee from its current 400 acres in Kaanapali to the former sugar lands a reality, Falconer said.

Biogas feedstock crops are slated for the Spreckelsville area and mechanically harvested row crops around Kahului Airport. Pasture-fed dairy operations are pegged for mauka of Pukalani.

Cattle ranching operations on irrigated and nonirrigated livestock pastures in the Hamakuapoko area, also shown on the map, have been launched, said A&B spokes-man Darren Pai. In December, A&B said cattle-grazing operations had been expanded to 4,000 acres. A&B has been working with Maui Cattle Co., which plans to put about 1,000 head of cattle on the pasturelands this summer.

In December, Volner also talked about an agricultural park that could total 1,000 acres or more on a site near the Kula Agricultural Park. The ag park site was on the map.

Land mauka of Haliimaile has been set aside for large diversified land leases, and orchard crops are slated near Kihei, according to the map.

Pai explained that the map “depicted potential diversified agricultural uses that were identified in our initial analysis of factors such as land characteristics and rainfall.” While some in the community have called for more specific plans from the company for its old sugar fields, Pai said that A&B has shared its plans during regulatory proceedings and at the state Capitol during “Agriculture Day.”

“We are making progress in our efforts to transition former sugar cane lands to diversified agriculture,” Pai said, noting the cattle ranching operations and expanded trials for growing and harvesting of different crops. “We expect to have more announcements in the near future.”

Volner told conference attendees that diversified agriculture will help the state reach its goals of food and fuel self-sufficiency. Gov. David Ige pledged to the International Union for Conservation of Nature World Conservation Congress in Honolulu in September that Hawaii would double its food production from 10 to 20 percent by 2030.

“We think HC&S, the central valley agricultural lands, will play a significant role in that,” said Volner.

The Hukilike No Maui Coalition gave a presentation at the February 27th meeting of the Alliance for Community Associations. A report on the meeting is available here. Text of the article is pasted below.

KCA back at Alliance meeting last evening with strong presence

A meeting about agriculture? What’s this have to do with South Maui? A LOT, especially when coupled with affordable housing and environmental conservation Once again we exhibited dedication “to protecting, sustaining and enhancing our ‘aina, kai and ‘ohana.” by listening to presentations and discussion of the future of Agriculture (AG) on Maui. At times there is a misconception that all of South Maui is urban; that neglects a variety of aspects of AG. Just look at all of the now barren cane fields along much of the length of N. Kihei Rd; even more all of the open land mauka of both the Pi’ilani and both sides of the Mokulele Highway to the animal shelter. All the Monsanto land. All in our region.  And we all EAT!

The meeting focused on “Hukilike No Maui,”  a coalition campaign proposed by the Sierra Club, to incorporate Agricultural  Goals, Affordable Housing Goals and Conservation & Preservation Goals in looking to future uses of the former cane land.   SEE TogetherForMaui.org for more on this project. One of the first steps is to understand just what are the housing needs and preferences of Maui’s residents. You can help create that understanding by going to the TogetherForMaui.org Web site and taking the three minute housing survey. Get your friends and kids needing housing to also fill out the survey!

We heard from a variety of involved guys, including

After introductions, Adriane explained where they hoped to go with Hukilike No Maui, and comments and questions were offered by the other four participants, Association members and other guests .

The date of the March Alliance meeting has not yet been determined.

Check out our very first outreach poster! Help us get the word out about Hukilike No Maui – contact us to get paper copies for your community.

Also available as a PDF: Hukilike No Maui Poster

We are pleased to unveil the start of a new coalition campaign, “Hukilike No Maui: Together for Maui.” The Hukilike Coalition aims to bring the community together to address how the former sugar cane lands can be used to address some of the most pressing issues for Maui: affordable housing, local food and energy security, and conservation. By working together, we can create comprehensive solutions. Over the past 3 months, a group of Maui organizations has put together the outline of this coalition, and now we need more community members to join to help get it up and running.
Sierra Club Maui Group will be unveiling the coalition’s main goals at its Annual Meeting:
Saturday, February 25th, 2017
11 am – 3 pm
Kanoa Senior Center in Spreckelsville, Hana Highway
There will be a presentation and panel discussion about the coalition’s goals, information on how to get involved, and time for everyone attending to give input on our next steps.  We imagine this to be just one of many community gatherings that will help us build ties and continue to work together.
There will also be a potluck lunch and additional food provided by Flatbread Company, Mana Foods, and Whole Foods Market.
Please bring a food dish if you can, as well as your own plate, cup, and utensils to cut down on waste.